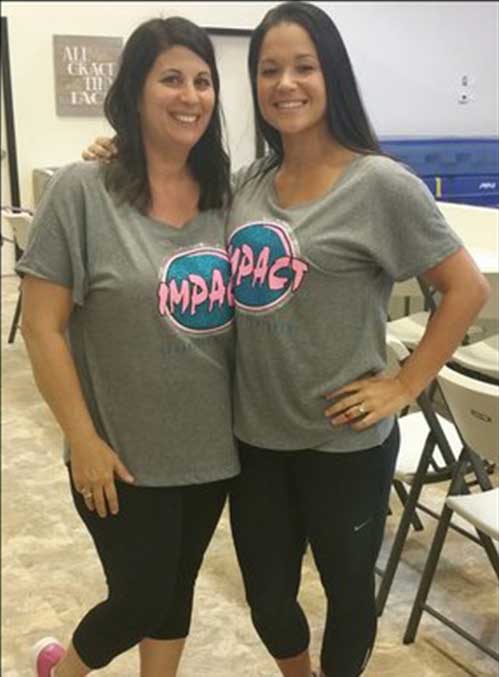 Maria Lawrence
Maria@ImpactGymAz.com
Maria is an attorney and has a Masters in Counseling, which is the basis for her exceptional problem solving and communication skills. She has extensive experience in the operations and administration of the gymnastics business and frequently utilizes her law degree to create and implement legal documents and policies and procedures.

Samantha Baltierrez (“Sam”)
Sam@ImpactGymAz.com
Samantha is an Arizona native and grew up in North Phoenix.  Her love for gymnastics began at the age of 18 months when she began taking gymnastics classes.  Samantha competed for a local gym up through Level 8.

She has been a coach for 12 years and is a certified USAG Gymnastics Judge.  Samantha’s passion for children is what makes her a successful coach and life trainer.  She heads up the coaching aspect of the business and brings a tremendous amount if gymnastics experience to the gym.  It is her unique perspective as both coach and gymnast that makes her an amazing coach. She is also USAG and safety certified.

Gabby is an Arizona native who grew up in North Phoenix. She has coached and managed gymnastics for the last 15 years. She has a passion for the sport and shaping the next generation of gymnasts. She is married and a mother of two, Levi who is 9 and Kinzie who is 6.

Nikos Kentimenos – Girls Team Department Leader & Head Coach – Coach Nikos was born and raised in Greece.  When he was a young boy he began his gymnastics training.  He was very talented and eventually became a member of the Greek Men’s National Team.  He was the Greek National Champion many times over on various events but his specialty was pommel horse.  He was a two time National ALL AROUND Champion for his country.

After he finished his competitive career he began coaching women’s gymnastics and excelled in that as well.  He rose through the ranks and eventually became the Women’s National Team coach for Greece.  He has coached and competed all over the world and is truly a world class coach.

We are blessed to have him leading our Girls Team program and as part of our Impact family.  The Impact philosophy was designed with Coach Nikos in mind.  Nikos is married and has two young daughters who are both in gymnastics and part of the competitive team at Impact.

LaShawn Benson Malvido – Girls Team Choreography Department Leader – Coach LaShawn was a former JO gymnast and competed through Level 9.  She loves to dance and has been featured on “So You Think You Can Dance,” “Soul Train” and has opened for various artists at their concerts.  Her main focus is coaching beam and floor and creating unique music and routines. Coach La Shawn has been coaching for 15 years and combines her passion for dance with her passion for gymnastics.  She is married and is the mother of two beautiful children.

Abrianna Lawrence- Camp Department Leader & Coach – – Coach Bri, as she is referred to throughout the gym, has been doing gymnastics since she was sixteen months old. Bri was trained as a gymnast by Samantha Baltierrez from the age of four until she was 10 years old.  She competed through Level 7 in the JO Program and retired at the age of 14 as the Regional Vault Champion.  Bri heads up our Camp program and Special Events. Bri has been coaching for  years and coaches Team, Recreational and Developmental gymnastics at Impact and on occasion helps at the Hospitality Center.  Bri is a valued member of our Impact family!

Your IMPACT Gymnastics Academy training begins with and is built on World-class coaches.

Madisyn Daniels – Coach Madi is a former member of our Xcel Team at Impact.  She coaches Rec and Developmental Classes.

Camryn Evans – Coach Camryn is a former gymnast and can often be seen tumbling into the pit during her off time.  She coaches our Developmental kids and turns them into team members.

Annie Goodin – Coach Annie is a valued member of our Team coaching staff.  She has a wealth of gymnastics experience and loves “singing” routines to the kids.  She used to be a real CSI investiagtor with the Police Department but she missed the kids so much that she came back to her first love, gymnastics.

Gabby Lawrence – Coach Gabby is one of our main Team and Xcel coaches.  She started gymnastics when she was 15 months old. She was trained by Samantha Baltierrez and at the age of 6 was named the Arizona State Level 4 Beam Champion. Gabby was also a member of the 2013 National Team and had the opportunity to train at the United States Olympic training facility in Texas. Gabby competed through Level 8 and was training Level 9 when growth plate injuries caused her to retire from gymnastics. She loves coaching the “littles” and is a valued member of our Impact family!

Chrislyn Perry – Coach Chrislyn has been coaching for nine years and coaches in our Team and Developmental programs.  She loves working with the competitive team and enjoys working with children.  She is currently in school working to become a dental hygienist.

Kaler Smith – Coach Kaler coaches Rec and Ninja Zone. She has 4 brothers and really enjoys the tough skills required to be a Ninja.

Max Stanard – Coach Max is a coach favorite with the kids.  He coaches Ninja Zone and Tumbling classes. He is an avid swimmer and loves teaching the big skills.